Welcome! We're delighted that you could join us as we make our way along the "Irish Ancestry Trail" in North America - specifically the part that now comprises much of Canada east of Toronto. So, what is the "Irish Ancestry Trail"? Well, that's the name that we give to the more common paths of immigration that the Irish followed as they left their homelands on the island of Ireland all the way from the 1600s to the present day.

In September, 2017, we decided to pack our bags and head along just one of these trails. The plan was to fly to the city of St. Johns in Newfoundland – travel westward to the City of Toronto. Along the way we would meet up with the descendants of many of the Irish who made their way to this part of the world, survived, thrived and put down roots.

So, this feature is divided into nine different sections outlined below – but I do suggest that you fully read all of the present Introduction section to get a flavour of where we went and the people we met along the way!

Our Route along the Irish Ancestry Trail.

Ok, let me start by saying that the “Irish Ancestry Trail” is a name that we gave to this journey! However, many of the ports and inland settlements that attracted Irish settlers over the years come up again and again in the stories that our readers share with us. Places like St. John’s in Newfoundland or Saint John in New Brunswick or maybe Quebec City in Quebec. These are just some of the areas that accepted large numbers of Irish immigrants down through the centuries – some settle nearby and others to make their way into other Provinces of North America and the USA. 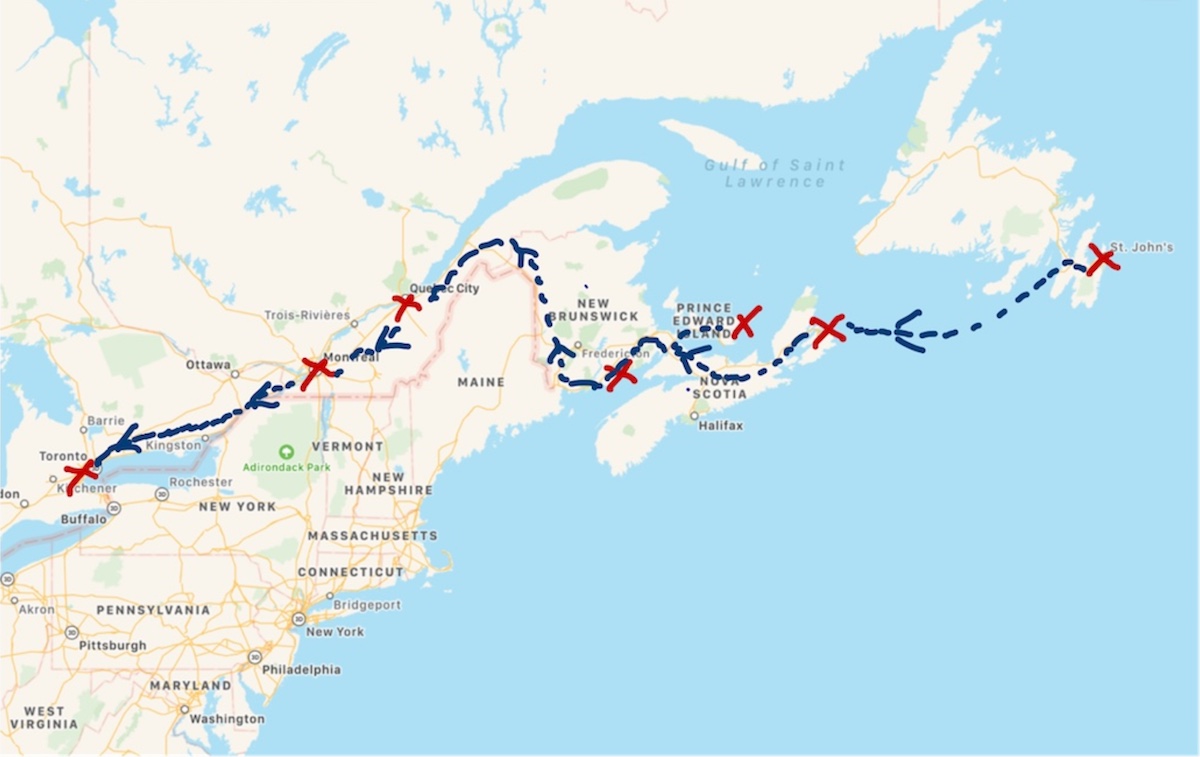 When we planned a route for the journey, it seemed just right to head to the first stop in Canada westwards from Ireland – and then head west along the Maritime regions into Quebec and Ontario, broadly following the Gulf of Saint Lawrence and the mighty Saint Lawrence river. So, you can see our planned stops along the way in map above using a red x. Now, our journey did not turn out as smoothly as planned (or as planned!) but lots of friendly faces and serendipity along the way made all the changes and diversions very worthwhile.

Also, we remembered the advice we give to all folks visiting Ireland – make sure you leave lots of time to get to know the locals. Get out of your car, walk around and ask for directions. Bearing this in mind, we made sure that we had a “host” in each of  our stops along the way – and we use the stories of these gracious hosts (and their ancestors) to breathe real life into a set of articles that might otherwise have been moribund with records and maps. So, introducing our guides along the way…..

Meet Our Guides Along the Way.

Now, while a map is a good start for finding your way along such a huge country – it was really the stories of some of our Green Room members that we wanted to use as a guide. So, here are the five very special people that we met (among many others) along the way. We use their stories to tell the deeper tale of each province – perhaps you can spot a story that is very close to one of your your own ancestors?

Donna Comerford, St. Johns, Newfoundland. Donna’s Comerford ancestors arrived in Newfoundland in the early 1800s. She has yet to find out for sure, but it appears that they originated in County Kilkenny in Ireland. You can find out more about Donna in our Newfoundland section of the Irish Ancestry Trail.

Tony Dolan, Charlottetown, Prince Edward Island. Tony is quite unique among our “descendants”, as he is a first generation Irishman living in Canada! This Dolan came all the way from County Roscommon in Ireland in the 1970s. You can find out more about Tony in our Prince Edward Island section of the Irish Ancestry Trail.

Sandy Laferriere, Saint John, New Brunswick. Sandy’s Kennedy and Reid ancestors arrived in New Brunswick in the mid 1800s – before eventually settling just across the border in the state of Maine. They left from County Derry in Ireland – and it appears that they may have originated there also. You can find out more about Sandy in our New Brunswick section of the Irish Ancestry Trail.

Carolyn Oliver Hendry, Montreal, Quebec and Toronto, Ontario. Carolyn’s Oliver ancestors arrived in Montreal in the early 1900s. Her Oliver ancestors originated in County Armagh in Ireland. You can find out more about Carolyn in our Montreal and Toronto sections of the Irish Ancestry Trail.

Thank you all for your wonderful company and hospitality along the way – and for being so generous in sharing the stories of your Irish ancestors. We do hope that you feel this feature does them justice. I know that everyone else will enjoy a peep into a world that became home for so many of those shared Irish ancestors of ours.

Right, that’s the end of the introductions – time to finish our packing and head off on our trip. We do hope you will join us along the way!

Go to The Next Section: Newfoundland.