We start our trip along the Canadian-Irish ancestral trail - heading to the very Irish province of Newfoundland. 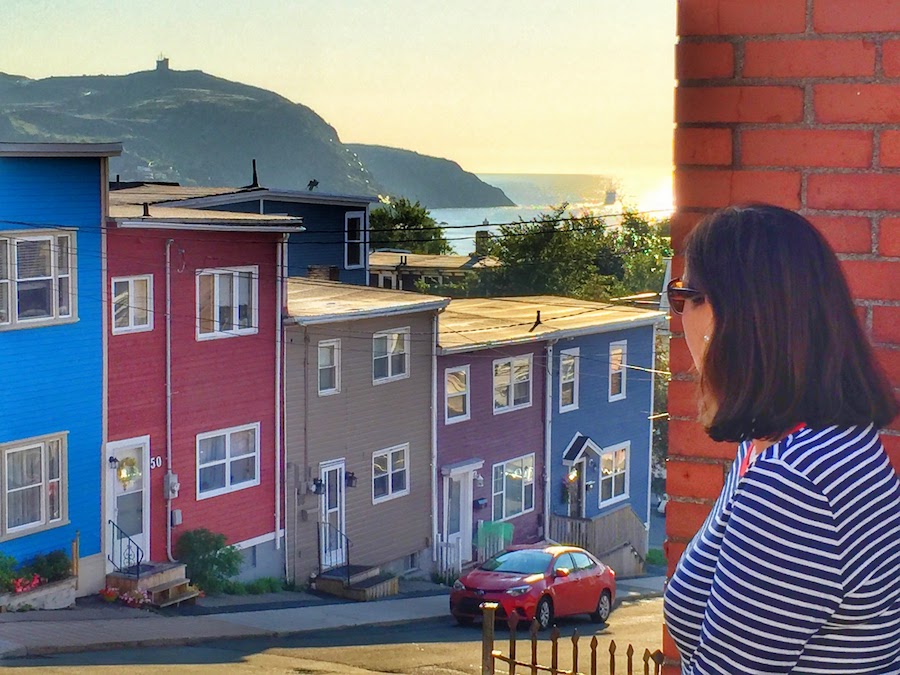 We landed in St. John’s, Newfoundland at 11.00am local time. Just 3.5 hours behind Ireland (Cork, actually) – and the 5 hour plane trip was quite a lot less than our ancestors had to endure. I must say (unlike the photo above – which was taken later in the week) – the environment looked quite familiar to an Irish person.

Lots of fog and drizzle! But, we quickly found that Newfoundlanders are some of the friendliest people on the planet!

We first met Donna Comerford in 2015 when she and her husband were on a trip around Ireland. She was one of our Green Room members, and shortly afterwards we did some research work on her Comerford line that came to Newfoundland in the early 1800s. So, long story short – Donna was our host for St. Johns (and a great job she did too!). Donna Comerford, St. Johns, Newfoundland. Donna’s Comerford ancestors arrived in Newfoundland in the early 1800s. She has yet to find out for sure, but it appears that they originated in County Kilkenny in Ireland. You can find out more about Donna in our Newfoundland section of the Irish Ancestry Trail.

Donna very kindly met us from the airport and we started to make our plans at a local institution – Ches’s Fish and Chip Shop:

It’s only when you look at a map of Newfoundland (and Labrador) – you notice just how isolated it is. It’s a large island (about 20% larger than the island of Ireland), but the majority of the 528,000 population live by the coast and the majority of them on the Avalon peninsula to the extreme right of the map. And it was that Avalon peninsula that was to be our home for the next four nights. We then headed to Cabot Hill just outside the city pf St. John’s – I spotted the following sign – photo opportunity! We just happened to be visiting Canada in 2017, the 150th anniversary of the founding of the modern country of Canada. However, Newfoundland did not join the other provinces in Canada until 1949. I think we were getting the “orientation tour” from Donna – after all this is her home turf. The fog was down – as was the temperature, but the people and places are nice and warm. Next, Donna took us to a very specific place – where those ships over the centuries made landfall in St. Johns – and the New World. Here she is with a little more:

So, what was the connection between Ireland and Newfoundland down through the centuries? In 1497, John Cabot became the first European (since some Norse settlers) to arrive in Newfoundland. After Cabot, the next European visitors were Portuguese, Basque, Spanish, French and English migratory fishermen. By the late 17th century Irish fishermen started to arrive, who gave the Irish name of Talamh an Éisc to the island (pronounced Tall-uv 0n ayshk), meaning “the fishing grounds”. Carina at the Irish exhibition at “The Rooms”, St. Johns

Many of the early – and later – Irish migratory fishermen came from the counties of Waterford, Wexford, Carlow, Tipperary, Kilkenny, West Kerry and East Cork – all close to the main ports of call in Ireland as Cornish fishermen and others made their way to Newfoundland for the season.

Thomas Nash, an Irish fisherman who  settled in Newfoundland established the fishing town of Branch. He and his cousin, a Father Patrick Power from County Kilkenny, worked to attract more permanent Irish immigrants to Newfoundland from the early 1700s. By the early 19th century permanent settlement had become the norm. It appears that Donna’s ancestors arrived with this later wave of Irish immigrants in the early 1800s. By the time of the 2006 census in Canada, 21.5% of Newfoundlanders claim Irish ancestry. However, right from our first day on St. John’s – we could hear a strong Waterford accent in the air. We spoke to a local lady – she asked us where we were from – we told her Ireland and she mentioned that her sister had recently returned from there. “How did she find it”, I asked – “Like Newfoundland on steroids”, was her reply. It’s hard to travel around the east part of Newfoundland and avoid the Irish lilt, Irish music – as well as many Irish surnames. Quite an introduction to our Irish ancestral trail!

The following video elaborates on the Irish-Newfoundland connection. I think it is especially fitting that the video is narrated in Irish (Gaelic) with subtitles in English. What do you think?

While Carina and myself are “Come-from-awayers” in Newfoundland parlance, Donna Comerford is a Newfoundlander through and through. Although she now lives and works in Ottawa, you can see the affection she holds for her eastern homeland. I think she may be heading back this way permanently in years to come!

We asked Donna to tell us a little more about her Irish family tree – when did she start her research and what has she discovered so far:

My aunt started doing family research back in the 80’s and 90’s before she passed away.  I would talk to my other aunt from time to time about the research but about 2 or 3 years ago, I decided to jump in and really see what I could find.  My dad turned 85 this past year and I made it my mission to find out as much as I could about his direct line for him.  I’ve also been in contact with some “cousins” who had also tried their hand at finding information.  Turns out our great-grandfather married twice!  I just HAD to find out all those details!!  My mother died when she was only 48 (I was almost 22) and we didn’t really talk much about her family line – now I want to know all about it.

And the main Irish surnames in her family tree?

We captured Donna’s direct Irish-Newfoundland line in the diagram below: So, we cthe biggest questions that this family tree presents are:

So, if you are interested in taking a deep-dive into how to approach each of these questions – and some answers/suggestions we uncovered – have a look here where we work through Donna Comerford’s Irish Family Tree, Records and DNA Results (note: this is only available to Green Room members).

Moving on around Newfoundland.

Donna next took us out  to Cape Spear – the most eastern point in North America. It was amazing just how similar the landscape was to the West of Ireland. A walk to the point on Cape Spear

You can almost see Ireland from here! Over to you, Carina:

That evening saw a very nice meetup of readers and members in O’Reilly’s Bar in St. John’s. One of the reasons Carina may have been looking so nervous, is because she knew she had a date with a local fish after this photograph: You see, we were due to be turned into honorary Newfoundlanders through a ceremony called “being screeched in”! I’ll let this video do the talking (and many thanks to Donna for arranging this emotional and lip-smacking event!):

The next day, we drove out into the Avalon Peninsula – around the small fishing villages that dot the coast south of St. Johns. One of our first ports of call was Petty Harbour – one of many villages that show their painted wooden houses and boats in all their glory. While we were there, we came across Arthur O’Brien – a member of the Traditional Group called The Irish descendants. He treated us to many songs that we recognised from Ireland, including this Waterboys song that could have been written in Newfoundland:

We spent four wonderful days in Newfoundland – especially around the main town of St. John’s. Donna Comerford’s hospitality was second to none as she took us around the places that she considers special to herself and her family. The people that we met along the way were a wonderful mix of curious, independent, welcoming and friendly! Here is Mike on the quayside on our final morning with some thoughts before we pack up for the ferry to Nova Scotia:

Tom Donovan, another Newfoundlander and a member of our Green Room saw the above video and had the following to add:

Love the post Mike. Beautiful video of St. John’s harbour this morning. It has been a few years since I last walked the waterfront. To add to your comments re the resemblance to Waterford, the main river flowing into St. John’s harbour is the Waterford River coming down the Waterford Valley and just up the valley is a place called Kilbride. Can’t get much more proof of the Irish connection! To add evidence to your reference to the accent, back in 2013 my wife and I did a self drive in the south of Ireland. We had stopped in a place called Stradbally and were chatting with a few locals. They were surprised to hear we were from Canada, because of our accent they thought we were from Waterford. Very small world!! Have a great trip to Cape Breton. On your way to Argentia to catch the ferry you will pass by a community called Placentia (the French capital in Newfoundland prior to 1763). The community was populated by Irish immigrants from that point on. Keep the photos and videos coming. Looking forward to the rest of your journey along the trail. Safe travels!

So, Donna dropped us off at the ferry and we started on the next leg of our journey – an overnight boat-trip to Cape Breton Island in Nova Scotia. Donna and Friend in one of the many Irish Bars in St. Johns

Donna left the following note for us and all our readers:

I said my goodbyes to Mike and Carina as they headed off on the ferry to Nova Scotia.  Despite the rain and fog which greeted them (and hung around for a few days), the start of their journey gave them a lot to see and ponder on, I believe.

It was a great pleasure to spend the past few days with you both Mike and Carina and to be able to show you around wonderful St. John’s and surrounding areas and show you where my family lived and I’m happy that you got to meet some of my Comerford and Brennan relatives as well.  As was the case with many people who came from Ireland and stayed for a while, or were born in Newfoundland, some of my relatives also left St. John’s and moved to the USA.  I’ve found relatives in the Boston area (Comerford and Hurley so far).

As we pulled away from the port of Argentia in Newfoundland, we reflected on what a unique and wonderful place the province is! This is definitely a place that we would like to return to someday – and if you ever have an excuse to visit “The Rock” yourself, do jump at the opportunity!

Some final thoughts from Carina:

We’ll leave you with a list of Irish names that have been common in Newfoundland down through the years. Maybe you can find one or two of your own family names in the list?

According to Serry’s “Family Names of the island of Newfoundland”, there are about 1,339 Irish surnames found in Newfoundland today. They mostly arrived from the counties of Cork, Waterford, Wexford, Tipperary and Kilkenny in the late 18th century and early 19th century. Some of the most numerous Irish surnames are:

Do feel free to leave your comments and questions below.

Go to The Next Section: Nova Scotia.

Go Back to Main Table of Contents.