Home » Irish Surnames » Do you have an Irish Viking Surname?

Do you have an Irish Viking Surname? Sharing the Atlantic Ocean with the wandering Viking race, means there is sure to be many interactions. Throughout history the Norse visited and settled the coasts of Ireland, and even built inland cities. The surnames of Ireland reflect this history. 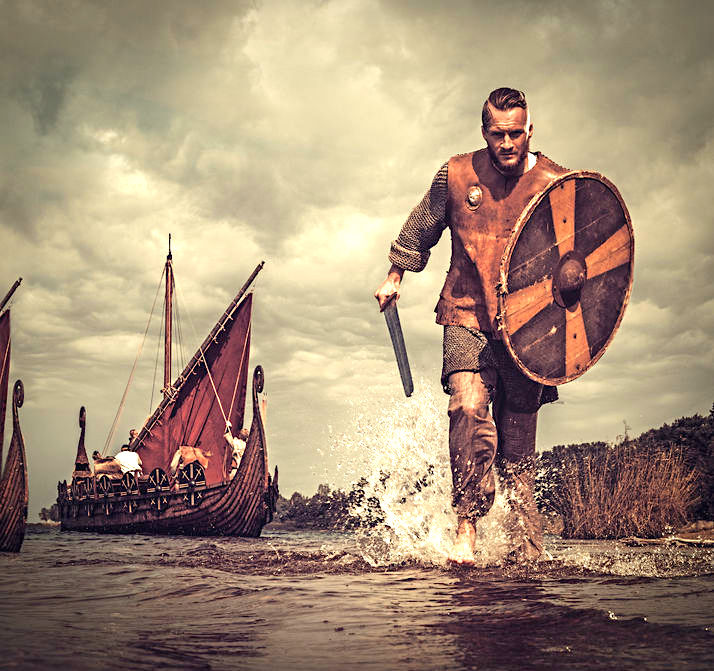 Did you know that Wicklow comes from the Norse “Vykyngelo” – meaning a “Viking meadow”? Let’s stay on that subject of Vikings for the rest of today’s letter. One of the most frequent enquiries I receive goes something like:

“I just got my DNA tested and it turned up as 12% Scandinavian. I wonder if that is the Viking blood coming out in my Irish ancestry? Also, do you know a typical Irish Viking surname?”

Just last year, we were on an Irish Homelands trip to County Wicklow. County Wicklow received its name after the local Viking-named town of Wicklow/Vykyngelo. The port was a hive of activity as longboats were prepared for filming the next series of the TV show “Vikings.” Have you seen this show following the adventures of the Norse King Ragnar and his crew? There was also an open casting call for extras for the next season – we were tempted, but I’d probably have to hide the razor for couple of months! So, do you have any Irish surnames of Viking origin in your family tree? Well, John Grenham makes the following very good point in an article on that very subject:

“There is no such thing as a Viking surname. True hereditary surnames were introduced in Scandinavia in the late 18th century, more than 700 years after the heyday of Viking expansion.” However, he does go on to acknowledge that we Irish took to the surname system with great gusto – eager to demonstrate our extended family allegiances. So, it is believed that we had the earliest surname system in Europe with the specific surname of O’Cleary from about the 10th century.

By that time, the age of the great Viking expansion was coming to an end. In Ireland, we first experienced the Vikings during a raid on Lambay island (off the coast of present County Dublin) in 795AD and over the following years, the raiding parties started to settle around harbours about the east and south coast of Ireland. These settlements grew into the modern towns and cities of Dublin, Waterford, Wexford, Cork and Limerick.

Over the following 200 years, the inhabitants of those towns had being trading, mixing and marrying with the local native Irish for many generations. Certain Irish families, like the O’Donovan chieftains, made a habit of intermarrying with the nobles of the Norse town of Limerick. By this time, we were looking at the residents of those original Viking towns as “Hiberno-Norse”. Many given first names of Norse origin became popular with Irish Gaelic families. Names like: Otir, Lochlan, Ivor, Olaf, Sitric and so on. So, a little like we do today – someone saw a name they liked and adopted it for one of their children – and this name then carried down in a family through the generations, increasing in popularity and frequency.

As you may know, the Irish system of surnames usually structures a name as either “son of a given name” (Mac) or “descendant of a given name (O). Many of the given names of Norse origin worked their way into a number of surnames that we consider Irish today. Names like: Other Irish surnames that have similar roots in a given Norse name include:

We also have the general descriptive name for a person of Danish origin: “Dubhghaill” – meaning “dark foreigner.” It was also anglicised as “Doyle” and sometimes “McDowell”.

While many of our Irish surnames with a Norse-named root do not have any known direct link back to Viking families – a few are on record as being of Norse origin. One example is my County Galway Grandmother’s name of “Dolphin.” A Norse family that arrived in Galway about the 1200s from the northeast of England.

How about you – do you have an Irish “Viking Surname” in your family tree? What about DNA – do you carry any “Viking blood” in your family? Do leave your comments below and let me know.