Home » Irish Culture & Customs » Where Did The Irish Come From? The Origins of the Irish.

Have you ever wondered about the origins of the Irish? In this letter, we look at the myths and stories that have endured down through the years - as well as visiting a very particular building in northern Spain associated with the Irish origin story. 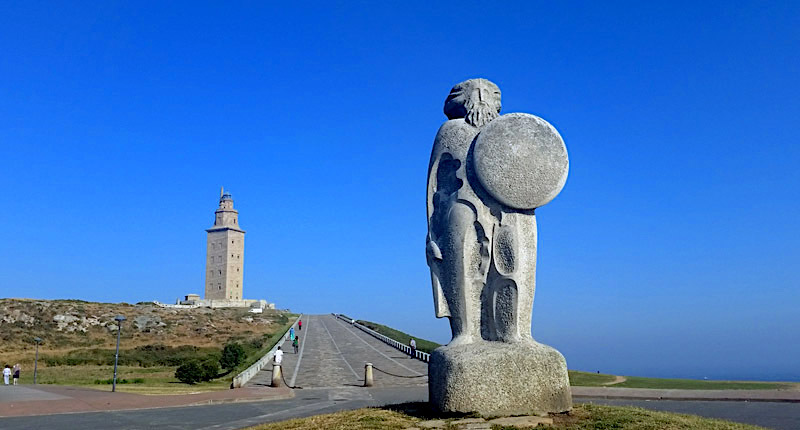 Carina and myself are later heading off for a week-long holiday in Spain – getting a good dose of sunshine to last us all the way through until Christmas. We enjoy a visit to Spain – and have always noticed common ground between the people of Spain (especially to the north) and the people of Ireland. In fact, many of our readers have reported a splash of Iberian peninsula in their DNA results. How about you – do you have any genetic or relation ties to Spain? Do leave a comment below and let us know.

So, I thought it would be a good idea to share the following letter with you, It addresses the question: “Where did the Irish come from?. You see, that question has been on the mind of Irish genealogists and historians for many centuries – indeed some of their guesses have worked their way into famous books that were published many centuries ago. We will have a look at one of those books today.

Have Your Ever Wondered About the Origins of The Irish?

Here in The Green Room, members often share the results of their DNA test with each other. I hear things like:

Have you had your DNA tested for ancestry? Did it tell you anything useful?It seems to be a core part of our identity to wonder where we came from – what was it that brought our family and kin to our present home? Many of the readers of this letter have spent years working on the answers to just those questions – maybe including yourself? However, it has always been that way. Most societies have “creation myths” – a chronology that links a mythical prehistory with the facts and places of the present. For centuries, the Irish looked to a particular book which captured the story of their origins – it was called “An Leabhar Gabhála na hÉireann” (pronounced “On L-oww-er ga-walla na hair-en”) – “The Book of the taking of Ireland” which is more commonly known as “The Book of Invasions“.

The Irish “Book of Invasions”.

Since it was compiled in the late 11th century by an anonymous author, the Book of Invasions has proven to be a popular and influential document right up the 17th century. It referenced ancient Celtic myths and poems, assembled them into a single narrative – and linked it all the way back to the Old Testament.The book told the story of how Ireland was subject to a number of successive conquests – each invading people replacing the previous inhabitants. There were the “Fir Bolg”, the “Tuatha Dé Danaan” and then the Milesians/Gaels. The myths, stories and histories contained in the book come across coherently – and I still hear parts of this book quoted (often unknowingly) in correspondence from readers.

John Duncan – A Depiction of the Tuatha dé Danaan

According to the book, the present Gaelic inhabitants of Ireland are descended from the “Milesians” of the north of Spain – who arrived in Ireland more than 2,500 years ago. In what is now a part of northern Spain, a king called Breogán built a tower with his sons Mil and Íth. When they finished they stood at the top, looked in all directions and spotted a mysterious island to the north.

They decided to travel to this new land – and after several adventures and misadventures – the sons of Mil overcame the “Tuatha Dé Danann” people who occupied the land at the time. The “Tuatha” people went underground to become the fairies that we know today – and the Milesians (named after Mil) became the Celtic lords of this newly conquered land. And so, the Celtic people arrived in Ireland for the first time.

So, where does myth connect with reality? What were the origins of the Irish?

Well, a few years back, Carina and myself traveled to the city of Ã Coruna in the province of Galicia in northern Spain. We stood at the top of that very same tower named in the “Book of Invasions”. It is now called the “Tower of Hercules” and was a Roman lighthouse built about 100AD. We gazed to the north on a bright clear day – and imagined we could see, maybe, something shimmering on the far-off horizon.

It was a glimpse into our past and present – where real and imagined combined to become the foundation that has built the Irish character into what is is today.

Over a thousand years after this tower was built, the time of the Gaelic chieftains was coming to an end in Ireland. Following the Battle of Kinsale in 1600s, Red Hugh O’Donnell and many of the Irish chieftains traveled to exile in Ã Coruna and Galicia. One of the first things that Hugh O’Donnell did on his arrival was to climb this same tower and see his home, a place to where the sons of Mil had sailed thousands of years before. Hugh never did return to Ireland, dying shortly afterwards in Spain.

These are the stories – a blend of fact and myth – that our ancestors passed down from generation to generation. Maybe you have heard fragments of these stories – taken from the Book of Invasions, passed down within your own family?

So, this afternoon we will head back to Spain – and maybe even imagine that we are returning to the ancient land of our forefathers. You’d never know where our imaginations might take us after that!