One Readers Search for her Irish Ancestry.

With tens of millions of people around the globe claiming Irish heritage, there is a ever growing number of descendants wanting to trace their ancestors back to Ireland. In this letter we will follow one reader's path to discovery.

We’re coming into mid-summer in this part of the world – and there’s a grand stretch in the evenings, the light is staying until almost eleven o’clock at night. I hope things are well in your part of the world today?

Last week, I mentioned that we have sent out over one million letters since we first started – and that initial letter was sent out to about 100 people. One of those people that has been here right from the beginning is Jane Tracy from Connecticut in the USA. She wrote back:

“Congratulations Mike and Carina on a million letters! I have been reading them from the first letter you wrote 3 years ago and absolutely love my Sunday morning letter.  Here’s to the next million!!!”

Well, thank you very much Jane – it’s been great to have you, and so many wonderful readers, along for the ride over the past three years. For the rest of this letter, we’re going to “turn the table” on Jane – and make her story the centre of our letter today. Maybe it’s a similar story to your own? Do read on and see what you think.

Do You Have an Irish Ancestral Story Like This One?

When Jane Tracy originally made contact with us – it was with a question that many of our readers have. It goes like this:

“One of my Irish ancestral names is Tracy – do you you know what it means and where in Ireland it comes from?” 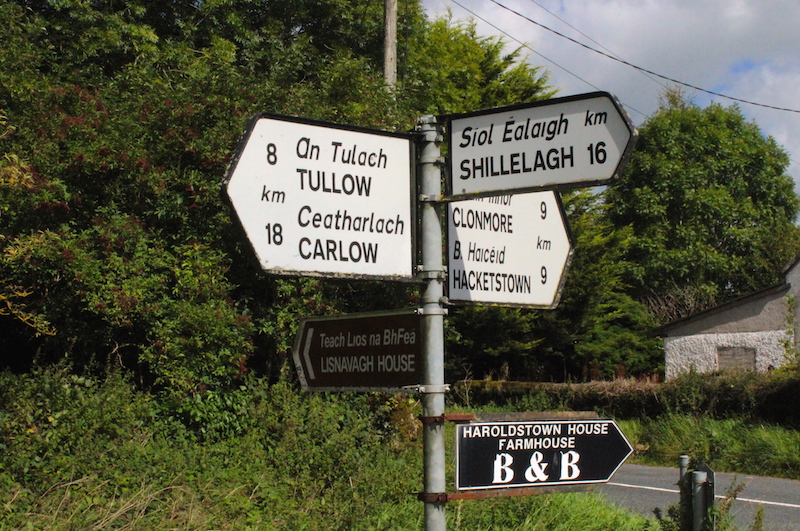 Now, many of us are quite puzzled about Irish surnames – so many of them sound like they might come from England, or Scotland or Ireland! Take my own surname, Collins – it sounds like an English name (and it is), but in Ireland it is usually the anglicisation of an old Irish Gaelic name – Ó Coileáin – mostly from counties Limerick and Cork.

The same goes for the surname Tracy. Even today, you will find the surname Tracy across England and Scotland. The name arrived with the Normans in 1066 – and is derived from the names of two villages in Normandy in France – “Tracy-sur-mer” and “Tracy-bocage”. So, that explains the English version of the surname Tracy. In Ireland, surnames came into being from about the 900s onwards. They were typically derived from the first name of a common ancestor within a family or tribe. One of the more popular first names in Ireland was “Treasach” – meaning “war-like”. As you might imagine, it was a fairly popular name at the time. A few different tribes adopted the surname “Ó Treasaigh” (meaning descendant of Treasach). Ó Treasaigh later became anglicised as Tracy/Tracey/Treacey from the 1600s onwards. While the Tracy families sprung up independently in Counties Laois, Galway, Cork and Fermanagh – they spread over the rest of the country as the centuries wore on. You can see where the Traceys families were found by the mid 1800s by clicking on this link. Back to Jane – who kept in touch with us:

“Thank you for your weekly letters. They helped to inspire me to keep looking! I was close to just believing that I wasn’t ever going to find where my family originated and just accept the fact that we came from Ireland – somewhere.”

But, the search was narrowing down for Jane and her Tracy ancestors. Shortly after, she joined us in the Green Room where she included the following in her introduction:

“My name is Jane Tracy and I have been getting ‘A Letter from Ireland’ since it first began. It is always my Sunday morning read with my cup of coffee. I had always wanted to know ‘where’ do my ancestors come from and had heard through some family stories that we came from Tipperary. All my research of finding the Tracys in that area came up blank. I finally discovered that we actually came from County Wicklow!! So after more research, my sister and I went to Wicklow this past June and found the church in Ballyconnell where our great great grandparents were married! After we spent sometime in the church, we got back into the car and just cried as it was very emotional for us both! “ How fantastic – isn’t it wonderful to not only know where your ancestors came from, but to also have the opportunity to see the places that they once walked. Have you ever had that opportunity? So, we asked a few more questions, and did some more research and came up with this entry in the 1901 Irish census for Jane’s Tracy ancestors.

Ah, but you see – Jane was on the ball, and was quick to come back with:

“Is there anyway to locate a map of that time to try and find the land/house where they were living?”

Well, we are delighted to say that after Jane contacted us last week, we felt motivated to dig even deeper – and we uncovered the specific land that the Tracy family farmed in the 1850s. And the best news is that some of those farm buildings still stand today – and I’m sure they owners wouldn’t mind a visit! You never know – they may even be relations of Jane from long ago! So, we’ll pass on the specifics to Jane – and hope that she will have the opportunity to one day visit the Irish homestead of her Tracy ancestors – and take a few pictures to share with the rest of us! Nowadays, when people ask us for help with tracing their Irish ancestors back to Ireland – we start by asking them to follow this guide – 3 Steps to Tracing Your Irish Ancestors back to Ireland. And that is enough for some people – it gets them started in the right direction. But,  over in The Green Room – Carina, myself, 2 on-site genealogists and over 1,600 other members will help to bring you all the way home!

That’s it for this week. As always, do feel free to comment below now if you would like share a story or the Irish surnames in your family.

Slán for now, Mike and Carina.